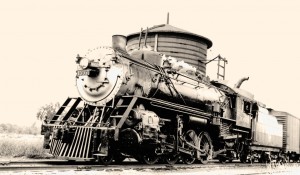 Following an earlier 2-8-2 locomotive acquired with the purchase of the Bismarck, Washburn, and Great Falls Ry. in 1904, the Soo Line took seven years before adding more locomotives of the Mikado type. This type of locomotive with 2 pilot wheels, 8 drive wheels, and 2 trailing wheels to support a larger firebox was first built for the Emperor of Japan, thus the name Mikado type. American Locomotive Company Order No. S-934 was completed in March of 1913. 1003 was part of this order constructed at the Alco plant in Schenectady, New York. The original cost of the 1003 was $25,654.63. Scrap price in the late 1950s for this size locomotive was about $5,000.00.

Engine 1003 had 28″x30″ cylinders, 63″ drivers, and came with a tender of 7500 gallons of water and 12 tons of coal capacity. Total weight was originally 433,500 pounds. The boiler carried 170 pounds per square inch pressure with 258 two inch flues and 34 five and three eighth inch flues. A Schmidt superheater was included in the original locomotive. Grate area of the firebox was 63.26 sq. ft. and the combined heating surface was 5163 square feet. This combination produced a starting tractive effort of 53,940 pounds.

The brake system was a Westinghouse 8 1/2 inch LH cross compound air pump. Valve gear is Walschaerts. Originally the locomotive was equipped with an oil headlight. Late in 1913 and during 1914 electric headlights were being applied to this series of engines. Other changes were made during the working life of 1003. Major changes were as follows: 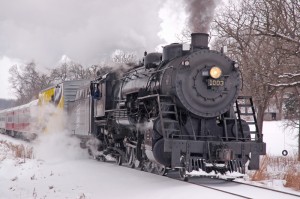 The classification lamps were changed to electric in 1920. The power reverse gear was installed in July 1925 followed with an auxiliary air reservoir to the power reverse applied in 1947. Footboards were applied to the rear of tenders during the 1930s for use in switching. The 1003 had tender number 1008 when it received its footboards at Superior on December 21, 1933.

In November 1941 some major face-lifting was done on 1003. A larger sandbox was applied. The wooden pilot was replaced with a boiler tube steel pilot. The wood and canvas roof was replaced by steel and the cab itself was enlarged. A feedwater heater was installed and the superheater replaced with an Elesco Type A. 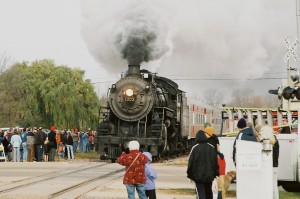 Engine 1003 could operate over all of the Soo Line system except for the Rapid River Line, Whitetail Line, Veblen Line, and all of the old Missouri River Division – Hankinson to Bismarck, Bismarck Drake, Sanish Line, and Pollock Line. On the Wisconsin Central portion the engine was not to operate on the Manitowoc Line, Portage Line, Athens Line, or the Eau Claire Line. All of those lines had very light rail.

Being able to operate over the rest of the system made the engine quite versatile. These engines were known to be efficient locomotives. Engine 1003 was retained to be kept in standby condition after 1955 when most of the steam locomotives were sold. Water tanks and coal sheds were maintained, for a time, between Shoreham and Sault Ste. Marie so that in the event business levels increased steam could take over on this district for the release of diesels to other areas. About ten engines were held for this purpose. Engine 1003 was retired in August 1959 and presented to the City of Superior, Wisconsin on December 30, 1959.

Soo Line 1003 was first restored in the period 1993-1996 with new boiler tubes and flues along with other necessary repairs. Tasks were performed in accordance with Federal Railway Administration guidelines and requirements. Locomotive 1003 then operated successfully in numerous events over the next 14 years. Between February, 2011 and September, 2012 a second rebuild of 1003 took place which has allowed it to resume service in October of 2012.